works of Seaborn Reed and 'others'

After much planning and dreaming, I finally sent off my application to participate in the sail training aboard the Brig Lady Washington, aka the HMS Interceptor (in Disney’s first “Pirates of the Caribbean” movie).  The training is called “2 Weeks Before the Mast.”

One question on the application seemed too important to me to be relegated to the two mere lines provided for on the form.  So, I added a page.  And here is what I wrote.  ^_^

Please describe your primary reason(s) for wanting to take part in this voyage:
This is the most important question on the application for me.  My main reason probably sounds ridiculously poetic (and way too long), but it is based on the experience I had while taking the Passage aboard the Lady Washington from Half Moon Bay to Moss Landing, in November 2008, and I would regret if I didn’t express it here.  What I remember so clearly:  I got to sleep aboard her the night before.  It wasn’t an easy sleep, as the surroundings were so new and unusual to me, but at the same time, it was a remarkable feeling to be able to do so.  I remember being woken well-before dawn, going on deck, and hearing the foghorn as we glided out of the HMB harbor and into the Pacific.  Then, about an hour later, witnessing the sunrise on the port side, as a breeze was coming up a bit.  Any usable wind was almost non-existent during the entire passage, and the motor was used throughout.  But it made the voyage last even longer, which was wonderful.  Halfway through, I went back to the main hold and lay down on one of the bunks, and the movement of the boat over the choppy waves–instead of making me seasick–simply rocked me gently to sleep, and I napped for an hour or so.  As the afternoon, and our voyage, progressed, I watched the canvas high above the deck, and marveled at how a force of nature was propelling us over the sea.  Then, reaching Monterey Bay, the sun was setting, and another ‘Passage’ guest began playing on his bagpipes.  Suddenly, time had no meaning for me.  The years melted away and it could have been centuries ago.  I’ll never forget the bliss of that moment.

What I witnessed during those 24 hours was a ‘universe’ unlike anything I’d ever experienced before, so far away from the concept of life on land, and not just on a physical level.  It was very hard to properly put into words, and still is.  But I came to realize, internally, that the life of a crew aboard such a vessel is so totally and wonderfully unique.  It was, indeed, a life-changing experience for me.  And I knew what I wanted to do, and have been yearning to do, ever since.

I wish to be part of such a crew aboard a tall ship, even if only for the brief two-week training, to feel the kinship of working together to guide and care for the beautiful vessel that keeps all safe atop the deep unknown of the ocean, as in the palm of a protective hand, a vessel which also heeds the commands of the helm, to take them where they wish to go.

Beyond that, I am thrilled by the idea of portraying a role from the past, and thereby helping educate people of all ages who wish to know more of these lovely vessels and the history surrounding them.  To ignite the same love I feel for historic ships, in children as well as in adults, would be a wonderful joy.

Oh, and I wish to absolutely work my ass off, doing something that I love.  ^_^ 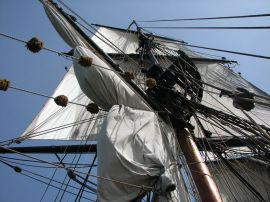 Sails of the Brig Lady Washington

The Stories So Far …
Work(s) In Progress:

For actual names of sails — such as those found on square-rigged vessels like the Brig Lady Washington shown above — I’ll maneuver you to this here page:  NAMES OF MASTS AND SAILS .

I write fiction under the pseudonym of Seaborn Reed.

Now I plan on giving the #ROW80 a try.  I have couple of WIPs right now:  a novel trilogy and a screenplay.  So, there is no shortage of things to do during the 80 days!

Looking forward to getting started on the 7th of Jan.